Chiquis Rivera net worth: How much does the singer make?

Chiquis Rivera is an American singer and television personality best known as the eldest daughter of Regional Mexican star Jenni Rivera. Though her personal life has been plagued by a number of controversies, Chiquis continues to rake in lots of money, thanks to her flourishing music career and consistent appearances on reality TV shows. Wondering how much money she actually makes? Here’s what we know about Chiquis Rivera net worth.

What is Chiquis Rivera net worth?

According to multiple websites, as of August 2022, Chiquis Rivera net worth is estimated at $5 million. Below is a rundown of how she has accumulated such a huge amount of money since she started showbiz in 2010.

Chiquis Rivera as a singer

A huge chunk of Chiquis Rivera net worth comes from her earnings as a singer. That includes album sales, royalties from music streaming services, and concert ticket sales, among many others.

Chiquis began her music career in early 2014 when she released her first single Paloma Blanca, which she wrote herself as a tribute to her late mother who died in a plane crash in 2012. She also made her musical debut on international television in 2014 with a performance of Esa No Soy Yo.

In June 2015, Chiquis dropped her first album titled Ahora. “I called it Ahora because it’s about living in the moment and appreciating the now,” the singer told Miami Herald of the album at the time. “I feel that’s how my life can be summed up. It really has a little bit of everything.”

Chiquis followed Ahora with her second studio album called Entre Botellas. Released in the spring of 2018, the album features songs co-created made by Lorenzo Mendez, Juan Rivera, and her late mother, Jenni Rivera. Among the tracks included in the album is Vas a Volver, Horas Extras, and Quisieran Tener Mi Lugar, which is a duet she recorded with her mom.

Chiquis’ most recent albums are 2022’s Abeja Reina and 2020’s Playlist, which won Best Banda Album at 2020 Latin Grammy Awards. Aside from a Latin Grammy Awards, Chiquis also won Female Artist of the Year at Premios De La Radio in 2015 and at Lo Nuestro Awards in 2017.

Like her mother’s, Chiquis’ musical style is classified as banda, a form of traditional Mexican music popular in Mexico and parts of the U.S. with large Mexican populations. Banda music originated in the state of Sinaloa and the music sound is primarily instruments such as tuba, clarinets, and trumpets.

Chiquis Rivera as a TV personality

Chiquis Rivera net worth also includes the bucks she has made from her appearances in various reality TV shows.

She made her TV debut in the reality show Jenni Rivera Presents: Chiquis & Raq-C, which aired on Universo back in 2010. Chiquis also starred in her mother’s hit spinoff reality show I Love Jenni, in which Chiquis and her siblings appeared in until its third and final season in 2013 on Universo.

Chiquis also starred in her own Universo reality TV series Chiquis ‘n Control, which ran for six episodes on Universo in 2012.

Chiquis Rivera as an entrepreneur

Chiquis Rivera net worth is also boosted by the earnings of her business called Be Flawless. Co-founded by Chiquis and medical professional Judi Castro in 2016, Be Flawless is a luxury line of cosmetics and skincare products.

Chiquis Rivera as an author

Chiquis also makes some bucks from her memoir titled Forgiveness. Released in April 2015, Forgiveness reveals the abuse Chiquis suffered at the hands of her father, José Trinidad Marín, during her childhood and the difficulties she’s faced in her personal life as a result.

The story within these pages also recounts what caused the distance between her and her mother toward the end of Jenni’s life. In Forgiveness, Chiquis brings to light truths that she wishes she had been able to reveal to Jenni.

In February 2022, Chiquis released another memoir called Unstoppable. In this autobiography, Chiquis shares the triumphs, hardships, and lessons of life after Jenni’s passing. 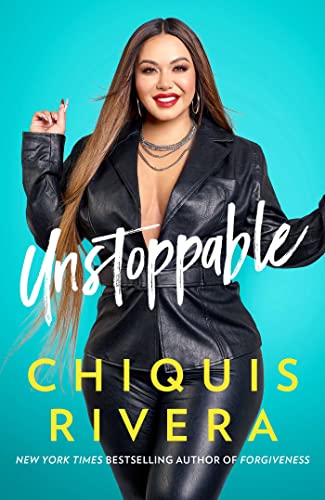 A new memoir from Latin Grammy Award-winning singer-songwriter Chiquis Rivera that reveals her lessons in life after her mother’s death.

What is Chiquis Rivera real name?

As mentioned above, Chiquis is the daughter of Jenni Rivera and her first husband, José Trinidad Marín. Chiquis is the first child of both her parents and has one younger sister, Jacquelin, one brother, Mikey, and two half-siblings from her mother’s second marriage.

In 1997, Chiquis’ aunt Rosie Rivera came forward and confessed to Jenni Rivera that José Trinidad Marín, used to sexually molest her, and was doing the same to Chiquis. Physical examination revealed that José did the same with Chiquis’ younger sister, Jacquelin.

The molestation case was opened in 1997 with José spending nine years as a fugitive before he was finally apprehended in April 2006 and convicted of sexual assault and rape. In May 2007, José was found guilty of 9 out of 9 charges and sentenced to more than 80 years in prison without parole.

Chiquis Rivera’s relationship with her mom

Chiquis and her mom Jenni Rivera cut their communication with each other in October 2012 following a rumor that Chiquis had an affair with Jenni’s third husband, Esteban Loaiza. In her memoir Forgiveness, Chiquis denied the rumor and attributed it to “toxic voices” that surrounded her mother at a time when she was deeply lonely and confused, leading her to question her husband’s fidelity and her own daughter’s loyalty.

Chiquis tied the knot with musician Lorenzo E. Mendez Ronquillo in June 2019. But in September 2020, Chiquis announced her divorce from Lorenzo through social media, claiming that it was a decision from both parties.

Fast-forward to 2022, Chiquis revealed in her Unbreakable memoir that Lorenzo was a drug addict with aggression issues. Chiquis claimed that at one point, Lorenzo spat in her face and grabbed her by the neck, only stopping after her brother charged at him with a dumbbell.