The life and works of Olivia Newton-John are being celebrated in a new comic book by TidalWave Comics.

Released on September 21st, five days before what would have been the actress-singer’s 74th birthday, the Olivia Newton-John comic book is the latest installment of TidalWave Comics’ Tribute comic book biography series.

Written by Sandra Ruckdeschel, with an epilogue by Michael Frizell, the comic book is illustrated by Alessandro Miracolo and Pablo Martinena.

“Writing this comic book about Olivia Newton-John was a dream come true for me!” Ruckdeschel said of crafting the 34-page comic book in a statement. “I grew up idolizing Olivia as a child and I still do as adult! She is the epitome of grace, kindness, and love. Researching her life story for this comic was not even work, it was pure joy! And having the opportunity to create a story and images to express who she is to the world was an honor. I hope everyone will enjoy reading about Olivia as much as I enjoyed writing about her. Olivia Newton-John will forever be in my heart!”

Publisher Darren Davis said that he and the TidalWave team were “honored” to have the opportunity to work with Newton-John on a comic book years before her passing in August.

“She gave us her insight and exclusive info which we have used in this issue as well,” Davis said in a statement. “She was amazing and inspiring to work with.”

The Olivia Newton-John comic book comes in five different covers, which you can see below:

Where to buy the Olivia Newton-John comic book 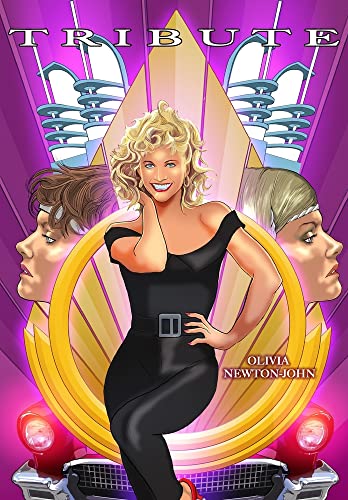 Who is Olivia Newton-John?

Born in Cambridge, England in 1948, Newton-John was best known for her starring role in the high-school musical movie Grease, opposite John Travolta. As a musician, her several Top 10 hits included the ‘80s aerobic anthem Physical and the soundtrack to the 1983 film Twist of Fate. Throughout her career, Newton-John won 10 American Music Awards, four Grammy Awards, two Golden Globe Awards, and many other recognitions.

Diagnosed with breast cancer in 1992, Newton-John used her popularity to bring awareness and education to the illness affecting millions worldwide. During her second bout with the disease in 2013, Newton-John privately tried natural medicine. And in 2018, when she revealed her third breast cancer diagnosis, she became an ardent advocate of medical cannabis. In fact, in 2020, Newton-John formed the Olivia Newton-John Foundation, an independent charity sponsoring global research into plant medicine for cancer.

Newton-John, who died from cancer on August 8th at 73, is the latest celebrity to be honored in TidalWave Comics’ Tribute series. Other icons immortalized by the company include Selena, Donna Summer, Carrie Fisher, Prince, David Bowie, and Elizabeth Taylor.

Part of the proceeds of the Olivia Newton-John comic book will go to the ONJ Foundation.

Previous ‘The story of 2022 is freedom fighting back’ against aggression, UK Prime Minister Truss says in UN speech
Next New on Netflix in October: Big Mouth season 6, Bling Empire season 3