Where to watch Limitless with Chris Hemsworth

Chris Hemsworth has a new TV show and it’s something that he hasn’t done before.

Called Limitless with Chris Hemsworth, the six-episode program is part documentary and part reality TV series that sees the Thor actor doing some extreme tests and challenges to help discover how humans can live better for longer.

What is Limitless with Chris Hemsworth about?

From National Geographic and Academy Award nominee Darren Aronofsky, Limitless with Chris Hemsworth explores the question “What if you could combat aging and discover the full potential of the human body?”

The show’s official description notes that “new scientific research is shattering conventional wisdom about the human body and offering fascinating insights into how we can all unlock our body’s superpowers to fight illness, perform better and even reverse the aging process.” These new discoveries are put to the test by Hemsworth himself, who, despite being in peak superhero condition, is on a personal mission to learn how to improve his health, strength, and intellect further into his later years.

In Limitless with Chris Hemsworth, the actor undergoes a series of epic trials and life-threatening challenges in order to understand the limits of the human body. He’ll learn firsthand how we can live better for longer by discovering ways to regenerate damage, maximize strength, build resilience, supercharge memory, and confront mortality.

Described as entertaining, immersive and life-changing, Limitless with Chris Hemsworth promises to rewrite the rulebook on living better for longer.

Dropped last November, the trailer for Limitless with Chris Hemsworth opens with the actor dangling off a rope a thousand feet off the ground, while explaining that it’s something to do with Disney’s new show about longevity.

As the video shows Hemsworth taking on different dangerous tasks like scuba diving and crane walking, he reveals why the show is personal to him. “I’m getting older now. I don’t feel invincible,” the Marvel Cinematic Universe actor admits. “It makes me want to push myself to such an extreme and live as long as I can and continue to make the most of every moment.”

When does Limitless with Chris Hemsworth come out?

The show will premiere on Wednesday, November 16th.

Where can you watch Limitless with Chris Hemsworth?

The series will be available to stream on Disney+. 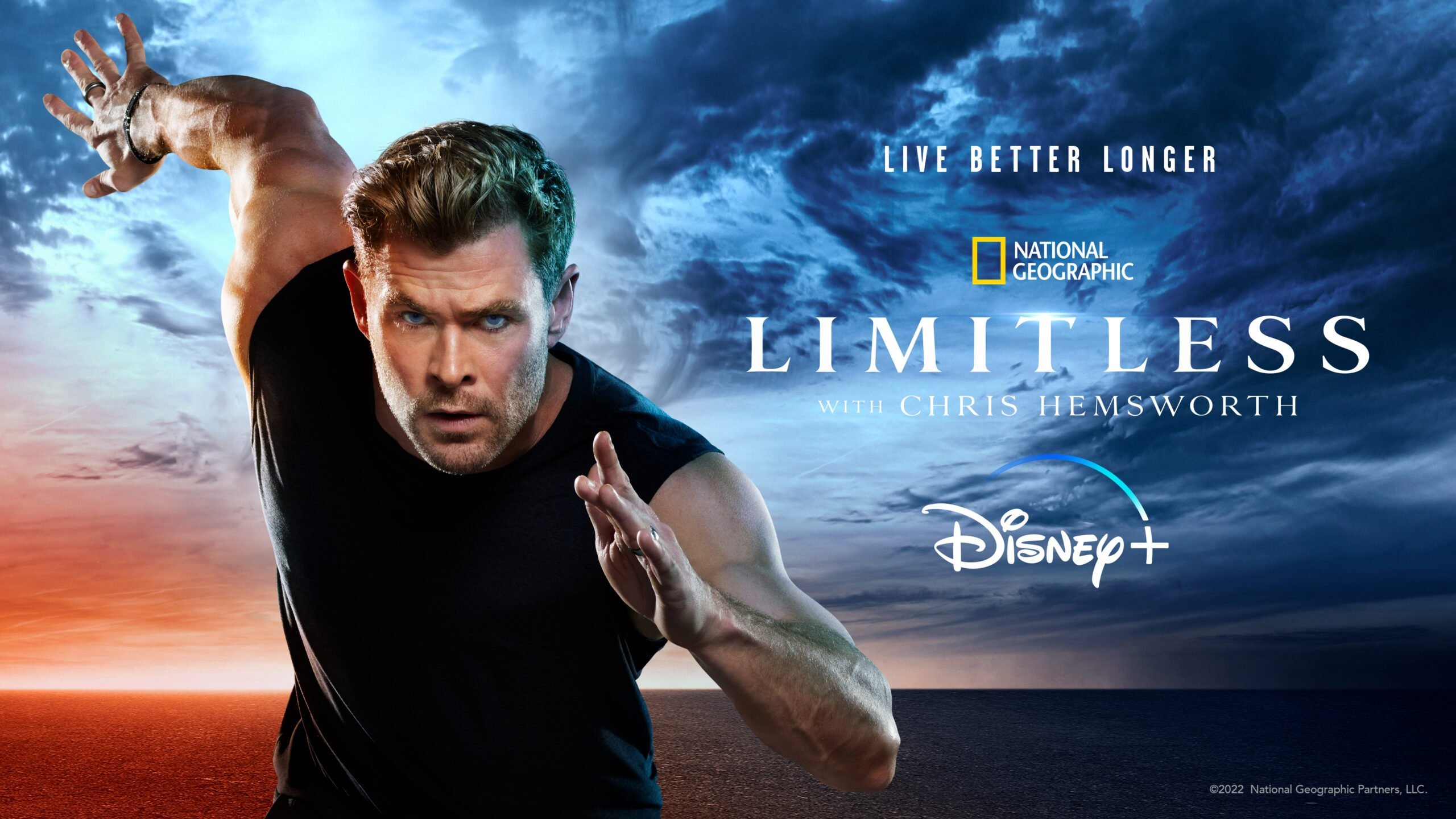 While details for each episode are being kept under wraps, National Geographic has revealed the titles of the show’s six episodes and released teaser photos for each installment.

In National Geographic’s Shark Beach with Chris Hemsworth, the actor is on a mission to uncover the science of shark behavior and discover how humans and sharks can safely coexist. After a rise in local shark attacks along the east coast of Australia, Hemsworth seeks to understand different species of sharks and their behaviors while also exploring new preventative measures and the latest technology to help stave off shark-human encounters.

How old is Chris Hemsworth?

On the movie front, Hemsworth will be next seen in the action thriller Extraction 2 and in the adventure film Furiousa.

A sequel to 2020’s Extraction, Extraction 2 is set to premiere on Netflix in 2023. In the upcoming movie, Hemsworth reprises his role as Tyler Rake, a former SASR operator turned black-ops mercenary. After being presumed dead in the first film, Rake returns for another high-stakes mission.

Furiousa, meanwhile, is a spinoff and a prequel to 2015’s Mad Max: Fury Road. The movie is set to open in theaters on May 24th, 2024, and stars Anya Taylor-Joy as the titular character. Hemsworth’s role in the movie is being kept under wraps.

If you buy something from a GEEKSPIN link, we may earn a commission